To start with, today’s route is mountainous with an irregular path. Be aware of the cairns. Especially when the inclination is long, sharp and rough. When crossing a hollow sump, you can choose between two paths. However, this depends on whether the river is flooded. Towards the end of the route, the path becomes easy and safe.

Even though the path is located in the mountains, you will experience some inclinations and dives. A final sharp and rocky slope will bring you to Ole’s Salmon River (or Itenneq). You should enjoy the views around you: observe the panorama over the river; the small and grand ponds next to it and the green areas, before you enter the valley. Most of the time it’s possible to walk along the path which meets the river directly and thereby makes a very easy crossing possible at a low point where the water is knee deep. However, if the river is flooded, you can take a footbridge. To get to the bridge, though, you must take a long and hard walk which leads you through the moor in the valley without clear paths to follow. 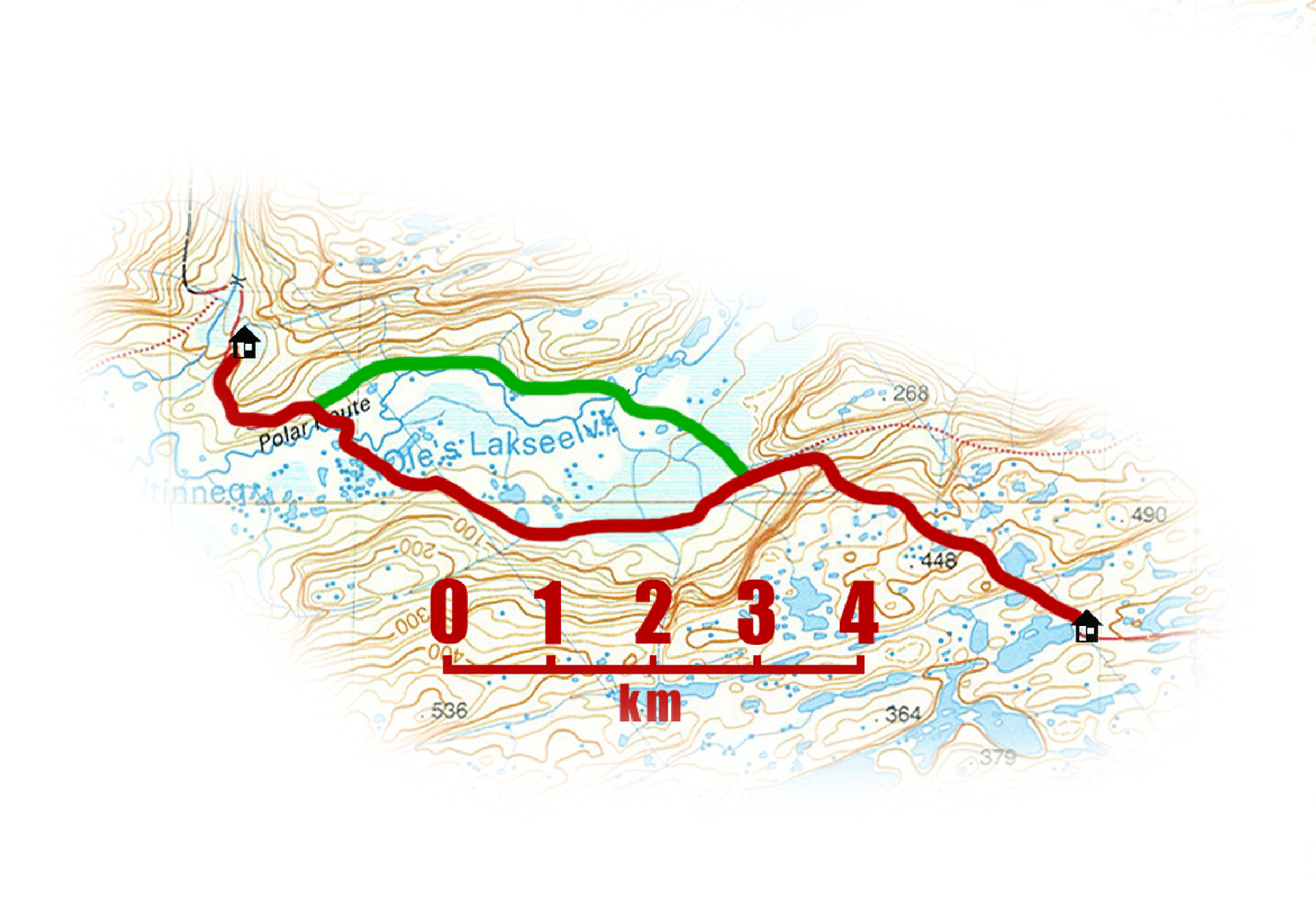 Take off from the Ikkattooq Cottage and walk on the path through a small slope. After a short, yet sharp incline you will see a small lake that might be all dry. Keep over the minor and major blocks spread on the slope under you. These are the result of the cliff breaking intro pieces. After bit more climbing, you must turn left and pass a clear mark on a cliff. Turn around to get a beautiful of the cottage and the lakes around it.

The path then crosses a small steep slope, and down left you will see a small lake. After a tough hike is yet another lake at your right hand. Continue while walking past a series of arched mountain sides generously spread with big rocks and Druidic stones (glacial blocks consisting of sandstone). As one might expect, the path isn’t very clear in such terrain, so look after cairns. At around 448 meters of height a top can be seen close to the route. After this, the path moves over a small pond and another small lake at your left.

You will then arrive at a stand. From here, you can see as far as the valley at Itinneq (Ole’s Salmon River) while Pingu and Pungup Sallia is visible above a small part of the big lake Tasersuaq. Be aware of markers during all of the descent. The reason for this is the fact that this route moves through stacks of rocks. When you move downhill, you must be aware of the direction of the change of the path while moving towards a small rocky cleft. The path doesn’t go through the cleft. It turns left to move through pills of rocks going directly towards the sunken valley known as Ole’s Salmon River or Itinneq. Here, the route runs across of the broadest and deepest river. Near the end of the inclination, ou have to choose whether to walk through the shallow river or take the footbridge.

In the beginning of June, the river is expected to be as deep as it gets in the year and the fastest as well because of the melted snow and ice. As Summer continues, the stream is reduced unless there’s an unexpected big amount of precipitation filling it up. You can walk over the river at a suitable crossing point. In June you can expect the water to be very cold and reach your chest. In July it will reach your waist, and in August it will only reach your knees. A footbridge was installed in July 2007 and has is placed 2,5 km. away in a straight line from the river towards the bay. It is recommended to use this bridge if you find it hard to cross the river. Naturally, this is your own decision and depends upon you level, skills and expertise. There is no clear way between the bridge and back again. If you decide to take the bridge, be prepared of handling the hard terrain.

To develop further on the contrast, the bridge crossing and river crossing is described individually.

A path goes directly over the wide land to Ole’s Salmon River (or Itinneq). You will find the part with grass and cotton grass to be the moistest while the area covered by erect birch is quite dry. From here, walk through a wide section of mud and cliffs. With a little luck it will be dry, but there might also be some low water covering the area. When you arrive at the river, you will see a cairn on the opposite river bank. However, it’s best to cross the river from a point placed a little up the stream since the water is fairly low here. At the beginning of Summer, the water will reach your chest and alter during the season it will only reach your knees.

If upon arrival you find the circumstances to be unfavourable, take the same way back and take the bridge instead. Don’t try to walk along the river as it gets too twisted.

After crossing the bridge, walk towards the mountain wall and the turn left. Here, you will meet a lake which touches the mountain. Then walk a small distance before crossing the area. Continue at a swamped path. You should stay on the outer end of the gorge where the wide, muddy land connects the steep sides. On this point of time, there will be a sloping stone wall for the most part. Finally, the cairns will lead you gradually up the hill from the wide valley and take you to a rounded, rocky hill with a view upon the valley.

The route (over the footbridge)

Hournestly, if you consider taking the route to avoid walking through the water, it’s not a good idea. The only reason to take the route is if for some reason you cannot cross the river through the low water. You will soon understand these reasons. This route has neither a clear defined path nor any cairns. The route goes straight West next to the wide sandy ground until it reaches Itinneq. The first uncomfortable part of the route is the fact that you must cross two small, slow streams passing through a deep and swampy moor. After this, the path first moves right of a series of big ponds and then stays on the right side of rocky lines reaching out from the mountains towards the gorge.

In order to get on level with these stone crests, you should be able to observe a little bunk that’s highly placed compared with the surrounding moor. When you pass these cliff crests, you should look after a group of granite boulders. Traveling further along the route will bring you over a river which might be hard to notice. To find the river, you have to follow the stream to reach the footbridge. To find the bridge, you can look after the 52 ° 20 ‘-line on the map. The bridge is placed where this line crosses the river.

When you have crossed the bridge, then walk towards a low stone wall. Find an opening in it to climb up higher. You will see a narrow path. This is the “main route” of the Arctic Circle Trail. Turn left to get to this route.

The path rises gradually over the valley bottom. You can either hike along the arched, rocky wad or walk along the tilting loop of the moor. In both ways you will at last reach the point from which the head of the Maligiaq Bay can be seen. While gradually inclining, the track turns right. The route moves under a rocky mountain top. You will now be able to see the Eqalugaarniarfik cottageat around 130 meters of height.