At the beginning of the route’s climb, the path coincides with a graded path. You must search correctly for cairns. You will come across a tall, arched top. Further past it, while walking on the trail, you will come a cross several remarkable lakes located in a beautiful valley. They are all connected to each other.

On the route, you will mainly see lakes and mountains. Climbing these mountains generally isn’t very hard. The top with the maximum height is a rocky mound located in a height of 450 m. It is turned toward a series of wonderful lakes with taller mounds reaching up behind them. Walk on the path and you will hike along some of these beautiful lakes. At the end of today’s hike, you will see yet another wonderful lake. You can sleep in a small cottage with a very basic design located at the top of a hill, or you can choose to live close to the lake in a bigger building. 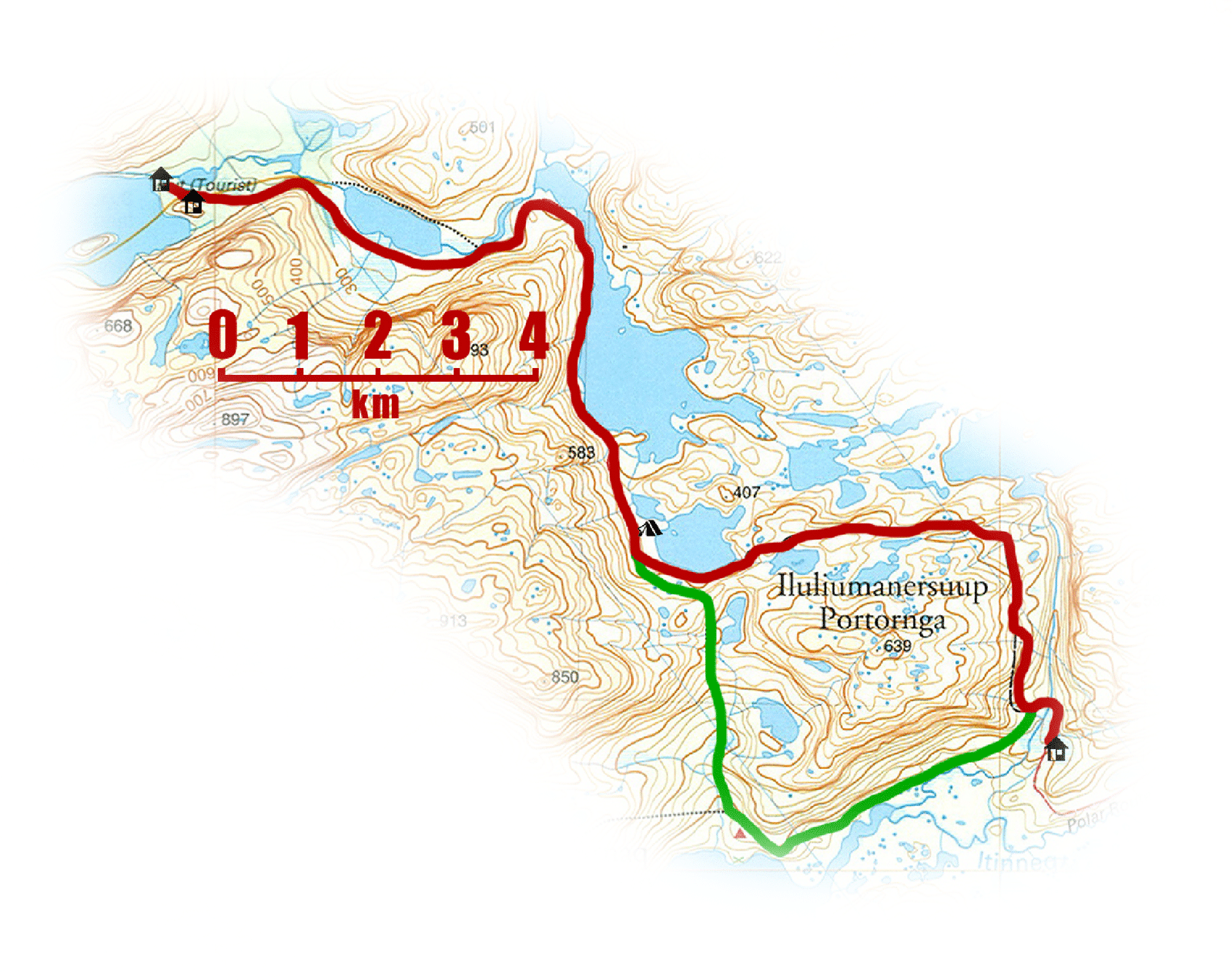 Take off from the Eqalugaarniarfik cottage and walk along a path towards a rocky river canal. Earlier, the river had a lot of water. Now, it’s dry since in 2007 an embankment was built over the lake placed towards North. When you have crossed the ricer, you will see a graded path which was constructed to transport heavy gear from the bay up to the lake. This path is quite rumbled, and it’s best to avoid it as much as possible. To begin with, you can avoid it by crossing over, so look after cairns on the route. The path follows the route in a moderately lower height. Later, the route and path become one.

Walk on the path until getting to a point where it suddenly turns. Here, you should leave the path to then walk along a small wavy path with an inclination. The place offers a beautiful view upon the valley of rounded tips with steep cliff surfaces. The path meets the route again. It rises sharply over a short distance to get to a cairn on an arched ridge. It’s best to leave the path at this point. You have now left the Aasivissuit-Nipisat area. (If you decide on continuing on the path, you will pass an embankment after 300 m. The lakes at West receive water from the lakes at East. The water has become a relay to supply the power of a hydroelectric power station.)

At first after the decline of the path, turn left to get on a small path. Look out for marks in order to cross a small valley and rise up on an arched rocky tip. Then take another turn left next to it. One of the first tips you can see is covered by a big rock which is split in many pieces. Nearby is an area covered by plenty of cliffs.

The approximate height of this point is 450 m. This highland is known as Iluliumanersuup Portornga. Enjoy the beautiful view upon an amazing series of small lakes spread over the bottom of Taseqqap Saqqaa. Maybe, you can see the mountains partly covered with snow. At a distance over a valley, you might be able to see the top of Qaqqapalat.

You need to look after cairns, especially before a sharp fall of about 100 meters of height. You will pass a small lake first and then a bigger lake under a slope. A narrow path arises at the lake’s Southern coast. At the South part of the lake, it’s hard to get any sunshine because of the cliffs towards North. The plants that grow in this part are used to getting very little sunlight.

The path then moves North and rises to cross a stream. A small lake can be seen from this point. The map shows this area as a campsite. Walk past a cairn, cross a stream and walk downhill to get to a much greater lake. The coast line at the lake is in a height of 300 m. above sea surface. According to the map, it’s a simple route along the coast. However, in reality it inclines and declines a lot, and the route moves away from the water. At times you will need to walk through swampy sections, rocky valleys or places with thick growth of willow.

Hikers generally walk along the coast until they reach a place where the river runs out from the lake. Past this point, the stream runs along the river. Before reaching the river, you have to look after cairns. These can be seen on barrows and cliffs above the lake. The path isn’t entirely clear, but the cairns have the route’s marking. A path can be followed to walk at the stream through the valley each way. The river becomes wide and divides into canals before it joins the lake. The land next to the lake is a combination of moss, water and clumps of low vegetation. To leave the lake, the river parts into canals. A majority of these becomes shallow ponds while small curves run through a wide piece of land. When you meet another river, the water runs slowly in the Northern direction. Fortunately, hikers don’t need to pass through any of these waters or the moor. The path stays at the bottom of the slope and is dry and firm.

Straight ahead in the wide valley you will see an arched hill. Left of the top is a little cottage. Hikers can walk directly towards it and pass through sections without any clear path, or they can follow the clear current cairns with almost no path to connect them. You will walk in the direction of a small lake at the right hand of the cottage. In the end, it will take you to a bigger cottage next to a bigger lake. However, it only becomes visible when you are very close. Interestingly, there is no tramped down path between the two lakes even though there’s only 500 m. between them.

You can see almost the same places from both cottages. This include big lakes and a remarkable island. In the horizon, you will see the mountains in Nerumaq, Taseqqat Saqqaa and Innajuattoq. Turn around to look away from the lake, and you will see the reach of Iigannaq and Taseqqap Saqqaa. The higher mountains that are above 1000 m. are covered by snow all year around.