The first part of the route takes place at the road towards the harbor. You will have time to adjust your backpacks to make them easier to carry. It’s a good idea to observe all vegetation and cliffs along the road at this point. This will help you recognize it easily when you come across it later on. For those who prefer that, it’s possible to take a cab to Kelly Ville. By doing this almost all of the hike – except the very last part – can be skipped. 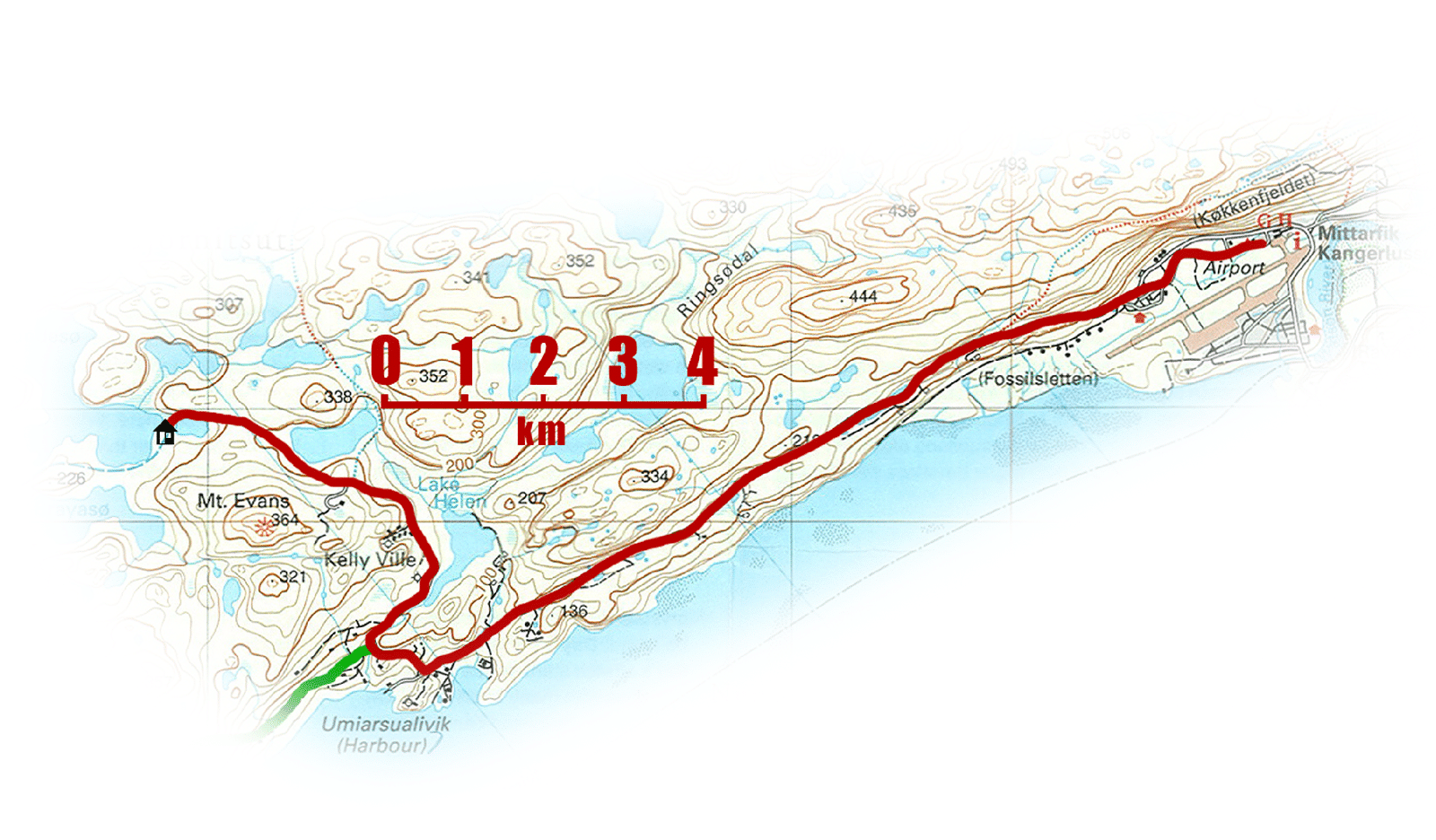 When you leave the airport at Kangerlussuaq, you should take a turn left at the main road, known as Marius Olsen-ip Aqq. At this road you will cross Polar Lodge and the police station. On your left hand you will see the airfield, and on the right hand a mountain wall. This is Køkkenfjeldet (The Kitchen Mountain”). One of these stone blocks is covered by a wall painting. At the cross of the road, Marinus Olsen-ip Aqq. turns left, while the road that continues forward – out past the three Statoil gas stations – is called Tankeqarfiup Aqq. You can take either since they later become one when you get closer to Old Camp.

Old Camp consists of cottages that look like barracks. This is the oldest part of Kangerlussuaq. It was developed by the American military as accommodation for the service men that took part in the building of the airport and the whole area. Old Camp Youth Hostel is placed here and offers a series of activities all year round.

Ascending along Kangerlussuaq Bay runs a road called Umiarsualiviup Aqq. surrounded by yellow barrels. You can see the runway of the airport from here and maybe take a small break. From this point you can see past Kangerlussuaq to the unique top of Sugar Loaf and maybe even get a glimpse of the ice. If you look past the strongly silted bay, Lake Ferguson or Tasersuatsiaq is visible. The most dominating plants in the area are dwarf birch, blueberry, Northern willow and cranberries.

Between the road and the harbor there’s a series of paths that crosses the stony area. However, it is not recommended to walk along them to avoid the main road entirely. The road continues descending and runs into a canal and above a small lake. The trail waves and offer a view over places near and far, while the ground changes between asphalt, stone and dust. After a slow, stabile descend, the tidal harbor can be seen. By passing a big and clear sign with the text “Sondrestrom Port”, you will reach a crossroads with diesel tanks nearby. From here it’s possible to take a small redirection to see the harbor.

Trip to the harbor

The harbor, also known as Umiarsualivik, only has one quay and one harbor office. Guests are arriving at the harbor by cruise ships. But they take off with busses almost immediately afterwards. An interesting activity to do at the harbor is reading the multicolored graffiti sprawled across the cliffs. The oldest graffiti than can be seen dates back to the days where the American military officials arrived. And of today more are still being added.

The road sign “Sondrestrom Port” is visible near the crossroads. As is clear from the sign, the distance to the airport is 13 km, while there’s three km. to Kelly Ville. Take this dusty, broad road upwards. While at the road you have to stay left to stay clear off a path that moves toward a stony hole in which a great glacial deposit is located. When you have passed this place, try to stay at the right side of the road to keep away from cottages that are scattered over the path. On this way you will pass two remarkable cliffs in the mountain side. These were painted by American military soldiers and seem to be female breasts. The beautiful lake Helen are visible during the trip on this way which in the ed will lead you to Kelly Ville that’s a small scientific society.

At the intrance to Kelly Ville two welcome signs are shown. The Kelly Ville sign is also known as Tikilluarit among hikers at the Arctic Circle Trail. The first sign very satirically welcomes you to this society with a population of only seven people. The other sign formally teaches you the scientific aims of the society. This society has specialized in the study of ionization of the upper atmosphere. First, you will come across a series of pre-assembled cottages, and then you will see a radar bowl. If you wish to learn the scientific facts and figures behind the natural wonder of Northern lights, these are the people to reach out to. However, that requires an agreement beforehand.

Follow the gravel road that ascends to get to a crossing. Walk past the crossing and continue straight ahead to stay on Arctic Circle Trail or turn left from the road to see a building on the slope of Mount Evans. After this you cross the rests of an old communication pole in the shape of old concrete tips on around 250 meters above sea surface. If you look at the panorama in front of you, you will notice the top of Pingu far away. From this point you cannot see Kangerlussuaq or Kelly Ville anymore. Instead you can glimpse a little part of the ice.

A small stone at your left is a landmark to indicate the route’s direction. It has a painted dot in red to mark the beginning of the Arctic Circle Trail. After this you will hike down the hill.

Along this path you will reach yet another old anchor point of concrete. Keep left. In parallel with this path is an off-road vehicle track build by reindeer hunters. If you wish, you can take this track since it will also lead you down the hill to the same lake. Stay at the coast of the lake and turn left. It can be useful to know that this is the only point that provides fresh water for the next 8 km. Several lakes after this point will have salty water which isn’t suitable for drinking. The path gradually ascends and passes through a broad opening. From this point the path returns slowly downwards to give a view over three lakes. The first of these haven’t been named, the one at the left is called Brayasø and the last one is Hundesø.

The Arctic Circle Trail follows the right coast of the unnamed lake. After this the route turns left between this unnamed lake and Hundesø. Along this path, hidden behind a cliff mound, is the West Point Cottage. Actually, the “cottage” is nothing more than an old caravan connected to a couple of shelters. Its quality isn’t fantastic, but it should be okay for a single night. Inside the caravan you will find a kitchen area, bunkbeds for four persons, a chair, a table, a couch and a paraffin heater to keep the place warm. An extra bunkbed for two persons is available in a connected shelter. There’s an outdoor toilet in a shelter near the lake which provides a beautiful view!

After this, the area known for its fallowed lakes begin. This is Tarajornitsut (”those who taste like salt” in the local language). When the weather is dry, these empty areas are covered by salt that are then washed away when it rains. Some hikers notice a trivial taste of salt while others can’t taste anything. The water in the lake contains a little salt and can be used for tea or coffee. But not everyone feels comfortable using it. If you decide to use it, remember not to add salt. 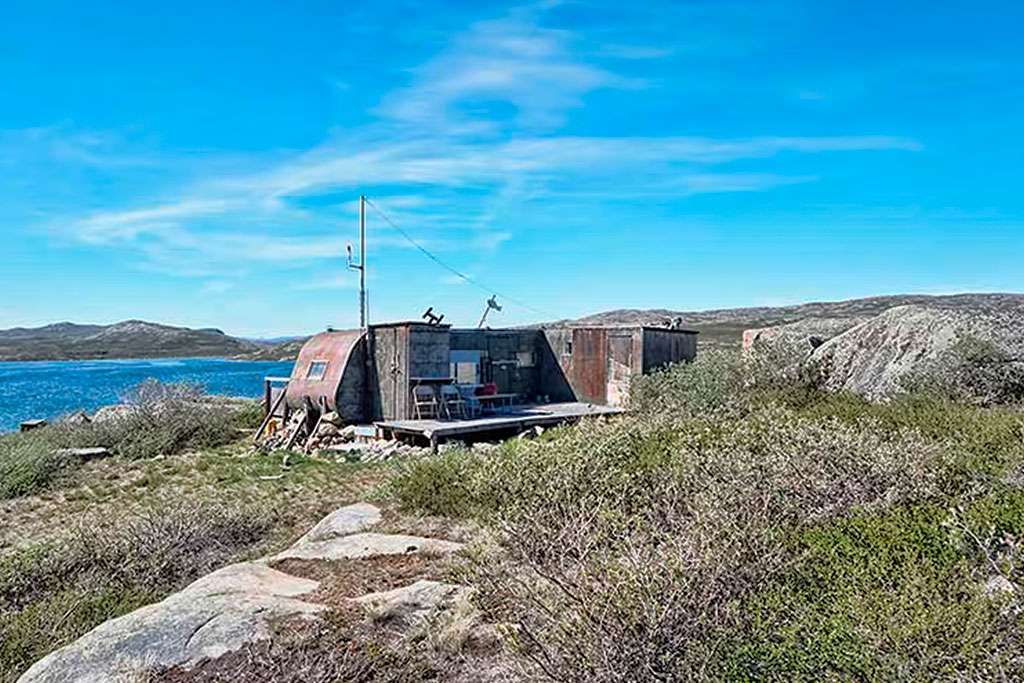