At the beginning of today’s route is a gradual inclination starting from the lake. Later, the route mainly moves downhill through a valley surrounded by mountains. In general, it’s an easy hike.

After the first gradual climb, there’s a fascinating view upon the lake if you turn around and look back. Walk through a few straight places and look South to see the wide top of Taseqqat Saqqaa and Nerumaq. Walk along a simple route and walk downhill through a picturesque valley. A sudden change of the scene takes place when you arrive at a cottage, almost unsuspected. If you have endurance for more, you might want to walk further down the valley to reach another cabin which is in 17 km. from the first one. But after a long day it might be exhausting to walk this extra distance. 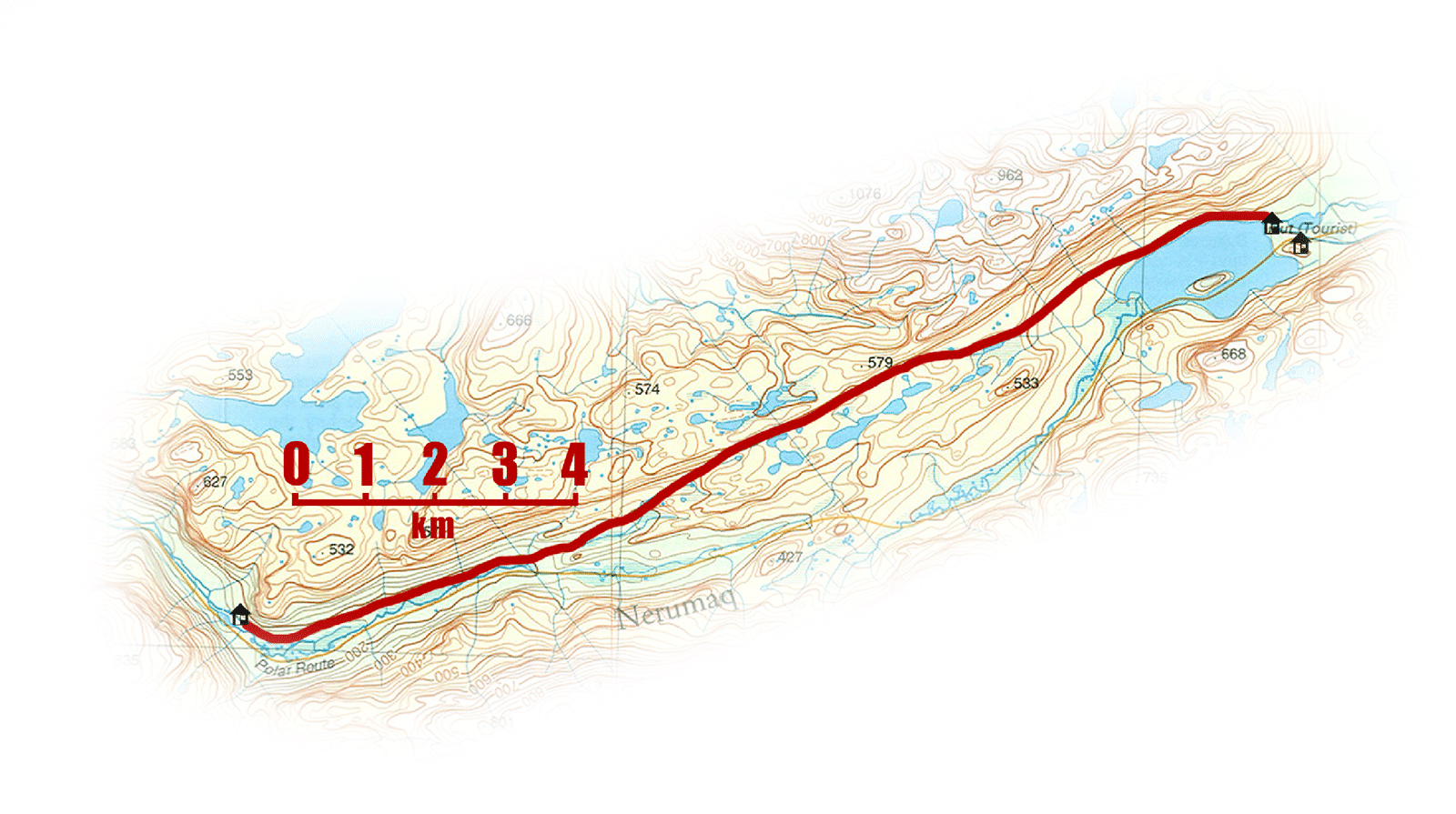 When you leave the small or big cottage, you must cross the river that emerges from the lake. The best place to do this is where the river has its starting point in the lake. Here are big granite boulders which can be used for jumping to easily cross the river.

Remember that in just a short distance from here, the river’s water runs into a rocky canyon. It’s not recommended to cross at that point.

When you are on the other site, just walk at a path along the coast of the lake. This will take you through low willow bushes. After some time, you will cross a swampy section, and then the path moves slowly away from the lake. Gradually, the path rises. You will pass a couple of small streams and feel the wind through the tallest willow plants. You will come a cross a series of slim paths. For that reason, it’s best to look out for cairns and aim at a small opening at the Southern slopes of Innajuattoq. There will be makers on clear rocks which help you keep track of the route. Below you will see a lake to your left. By crossing an area with quite some vegetation filled with cotton grass, you will come to a rocky area with a small lake on the right side. Look backwards regularly while climbing up to enjoy the peaceful views that are shown on the way.

The path continues along the rocky slope and up to around 475 m. above sea surface. The route passes a cairn over an opening. The path forms itself roughly over a slope. After this, it joins a long, shallow canal which is almost like a small valley which is places above a bigger valley close by. The slopes towards South are filled with small, beautiful flowers. By keeping right, you will arrive at a small lake. Turn left in the direction of the Taseqqat Saaqqaa-series to see a couple of greater lakes. You will se some areas covered by snow all year round. Pass another bigger and more rounded lake. Continue keeping in the right side. Hike towards an open place at around 475 meters of height. Then, walk at the path to ascent to a cairn over the crack.

While still being in a small valley, descend. In the middle of a swamp, you must look out for a cairn on a mound and fine the extension of the path which will continue with a climb and move into a valley while you stay under the slopes of Nerumaq. It is quite easy and moderately simple to walk on the path which leads you to the valley. The path is visible, and the earth is very green with rather few rocks. By crossing the river, the path will slowly take you up a little hill made of a rocky slope. You will find a cairn at the top of the hill. Below is a river running through unwieldy forest terrain with hillocks. It still looks beautiful, however. You will see an irregular structure growing in the opposite direction.

You can sense that the path moves along an edge because it stays extended over the river, while you walk at the bottom of a slope. This edge contains sand, cliffs and graven, but is mainly consisting of glacial deposits which has moved down the vertical sides of the valley and through time has been merged and become green.

The valley then turns right while you must keep under a sharp slope and walk around a series of great cliffs. It’s a sharp, rocky slope over the valley which can be hard to see if you cross the area in the end of the day. In front of you are slanted crests and maybe a glimpse of the top of Aqqutikitsoq that is covered by glaciers. On your left hand is a small lake. You have now arrived at the Nerumaq cabin.